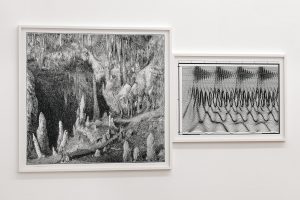 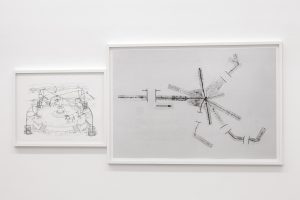 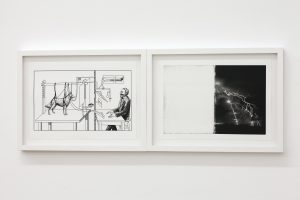 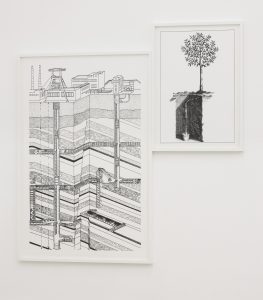 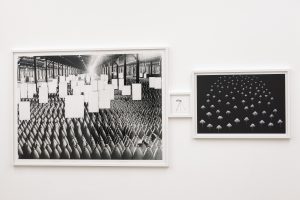 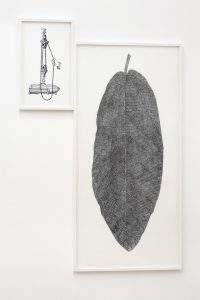 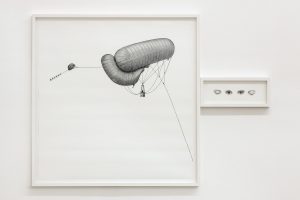 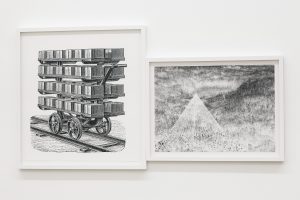 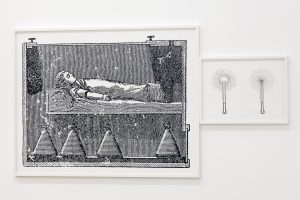 Along the Axis of the Mind is an installation made up of 21 images hung in couples along the walls of the exhibition space, with the exception of a composition formed by three adjacent images. Some of these pictures are illustrations taken from books of different kinds and are part of the “archive” of images which over the years I have created from library research. The other representations, instead, are my own drawings. Through the choice of the images, through their re-elaboration, by way of my drawings and the preferences on my part in combining and connecting these different images, I have tried to create a ‘whole’ that instills a subtle upheaval of the order and control generally created by the human being.
Connecting this reflection to one of the images in the installation: a photograph from the second decade of the twentieth century, which shows an impressive perspective from the interior of an English weapon factory. In the original photograph the whole floor area of the factory is covered with thousands of systematically placed bombs, while the workers who are controlling the products are dispersed more randomly in the enormous hall. My point of departure for this project was the reflection or, better, the question: what could make possible the change of  events? Which is the moment where an unstable situation inclines towards one which will be tragic? I thought about the structure of any conflict, and the fact that this photograph put in evidence the aspect of production in the weapon-industry was fundamental for me. I then covered each worker in the factory-hall with a rectangular piece of paper, and this created a group of around fifty white “canvases”: a gesture which evidences the trace of  a presence and accentuates the perspective of the enormous space. By “censoring” the connection between production and product, a tension, or void, is created.
Throughout the entire project there is a search for absence, for the interval that re-establishes a certain equilibrium between opposing forces.