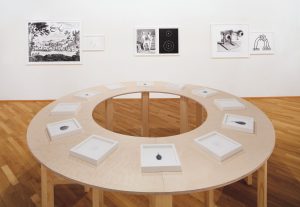 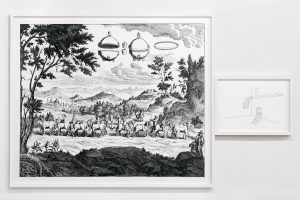 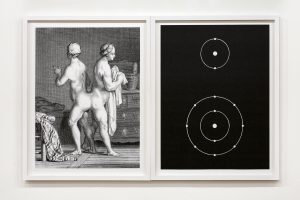 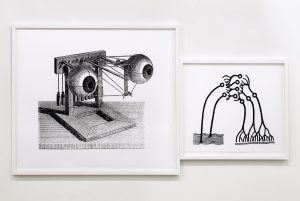 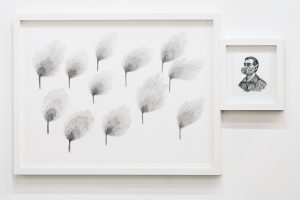 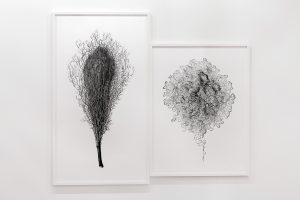 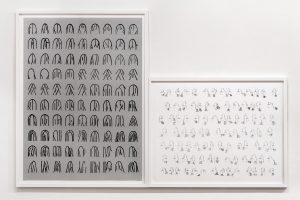 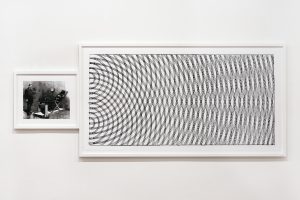 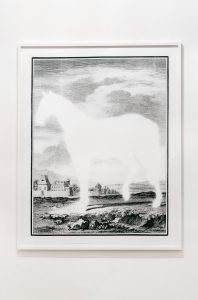 Bridges between Parallel Spheres is an installation made up of 15 images hung in couples along the walls of the exhibition space (with the exception of the last of these which remains ‘alone’) and a circular form with 12 images placed liked the hours on a watch face.
For this installation I began with a nineteenth-century illustration of a landscape in which the foreground is dominated by an elegant horse. However, in my final image the horse is inexistent: only its white and ethereal profile remains to bear witness to its physical presence or disappearance. At the same time I drew two staircases, suspended in midair. One ascends while the other descends with a movement of tension, the one towards the other, although without meeting or joining.
In thinking about the two representations I have described, and by means of analogy, I drew on the characteristics of noble gases: these are elements that have the properties of being invisible and odourless and which neither amalgamate nor react with other elements. This point saw the beginning of the successive chain of images. My way of proceeding, however, is not linear but based on continuous references, both visual and regarding content.
With this project my intention was to create a tension between elements that are not always similar or related but which nevertheless have a common relation.
Also with the choice of the two groups of subjects which alternate on the circular form I was referring to this ambivalence. The sap or vascular systems found in fruit transport their vital essence and are part of a reality that is not visible and not known in everyday life. I was interested in flanking this with an element that accentuated and expressed the passing from a state of light to one of absence. An object that evidenced the possibility of a choice. The light switch is a reference to the gesture establishing or interrupting a connection.