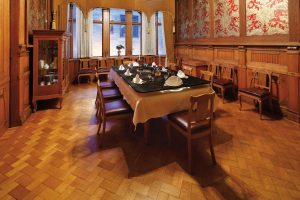 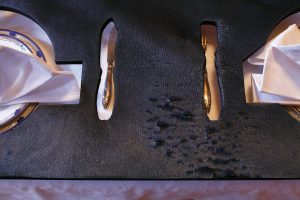 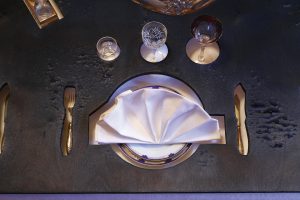 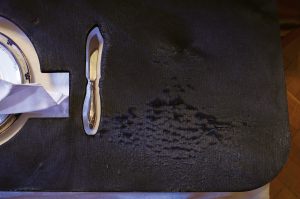 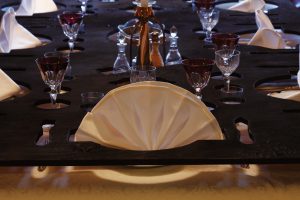 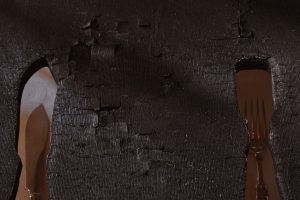 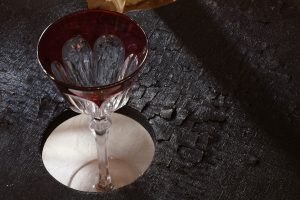 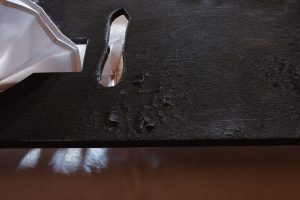 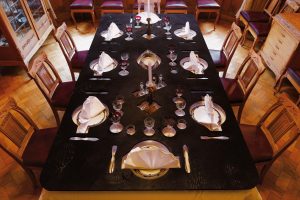 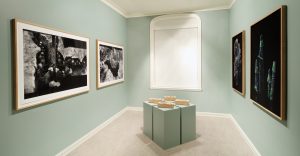 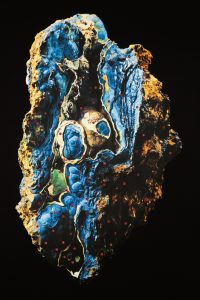 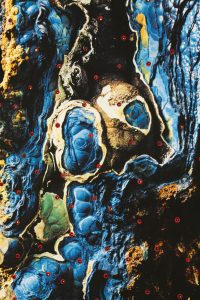 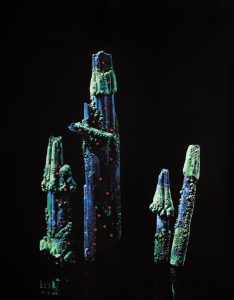 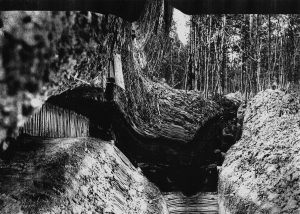 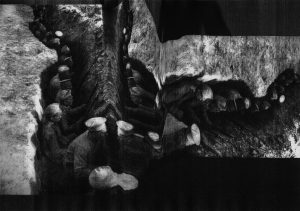 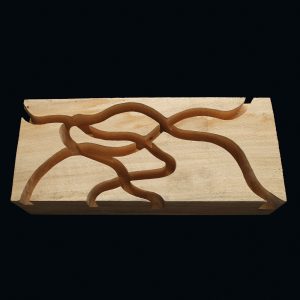 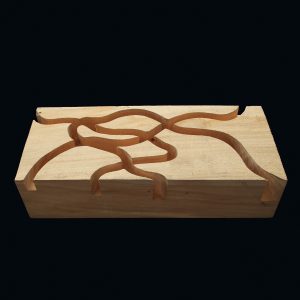 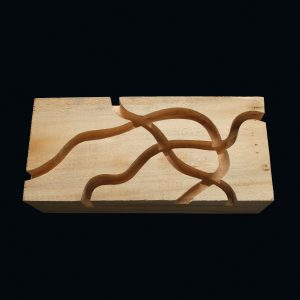 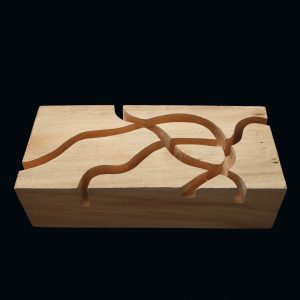 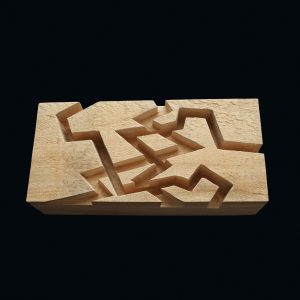 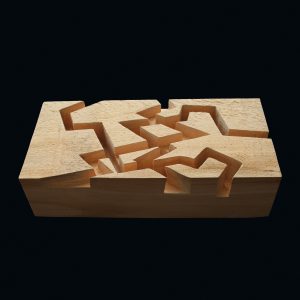 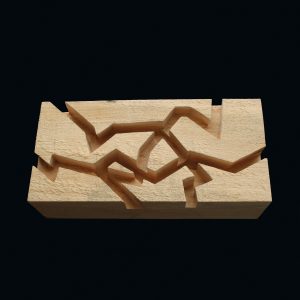 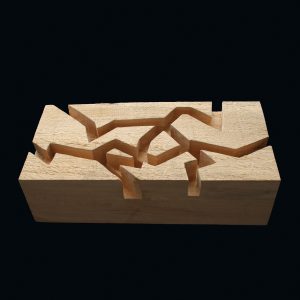 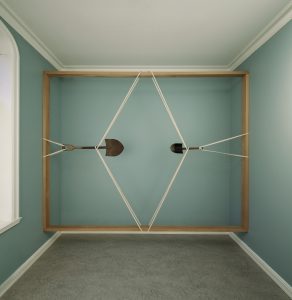 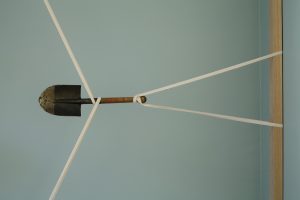 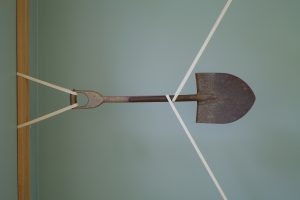 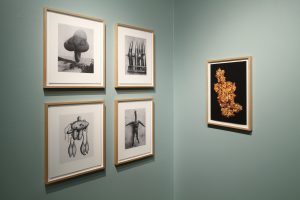 An Invisible Force / Chrystallized in Silence (2015).

The project Substratum has been exhibited at Jugendstilsenteret in Ålesund, Norway (from 05.10.2015 to 28.02.2016). The exhibition was shown in the museum’s three temporary exhibition rooms and also featured a site-specific intervention in the museum’s dining room, a Jugendstil gesamtkunstwerk.
The exhibition aimed to explore the connection between past and present, and the potential of expanding the temporal view. The project centers on, among other things, the notion of nature being a philosophical, aesthetical and spiritual fulcrum for the Jugendstil movement, and that the style emerged as a “fresh breath of idealism” in the period between ca.1890 and the start of the First World War; Jugendstil was a reaction against the alienation and estrangement of man by machine, generated by the advance of the Industrial Revolution.
The exhibition Substratum also reflects upon the relations between humans beings and the earth, and themes like geological processes, conflicts and war destruction are central. Tension arises between the geological, sub-earthly terrain and the industrial, power-ridden landscape above the surface. The title Substratum refers to underlying and deeper layers.

A geological, historical and social approach is applied to explore some of the underlying layers, visible and invisible, that shape our worldview and our understanding of history.

The intervention entitled An Unlikely Outcome (2015), refers to the disastrous conflagration (town fire) in January 1904 which left Ålesund in ruins and triggered the rebuilding of the town in Jugendstil style.
For the installation in the dining room, a wooden board with exactly the same size as the dining table was used. Then holes were sawn in the wooden board, all of them shaped after the outlines and contours of all the objects placed on the table, including plates, glasses, cutlery, candlesticks and napkins. The wooden board was then charred so that it turned black, and finally it was installed a few centimeters above the table-top so that it appears to hover in the air. Hereby, the tableware –belonging to the museum’s permanent collection– partially emerge from the holes of the burnt wooden board, and thus insinuate a sort of “double geography” of the Jugendstil upper-class table, almost as if two sets of historical and sociological meanings overlap each other.

Here two series of images, Ubi consistam and Hallucinations, contemplate the relationship between man and earth, in which the term “earth” connotes “geology” and “shelter”.
The series Ubi Consistam (2015) consists of colour prints that depict remarkable, peculiar and almost anthropomorphic mineral formations. Each of the images is mounted on a thick plywood sheet, whose surface first has been charred black, and then covered by a layer of red wax. Here the artist has experimented with the pictorial surface, and the potential of the “invisible” substrate beneath. By the use of a gouge many holes has been created in the paper on which the images of minerals are printed, and by the use of a counter sinker crater-shaped holes has been made in the surface of the underlying charred and wax-covered plywood panels. In this way several underlying layered levels are revealed: first, a layer of red wax under the colour print, then a burnt, black layer, followed by an inner core that reveals the plywood panel’s internal structure.
The series Latin title is taken from the phrase by Archimedes «Da mihi ubi consistam, terramque movebo», meaning «Give me a foothold and I will move the world». In this context, Ubi Consistam refers to the minerals’ steadfast character, their solid substance and ordered chemical structure. The holes in the images are reminiscent of deep wounds, or craters with glowing lava, and the work refers among other to the earth’s internal power, both as a natural resource and as a destructive force.

The series Hallucinations (2015) depict historical black and white photographs of the trenches of the First World War which the artist have manipulated by moving and turning them on a photocopying machine in motion, so that the horizontal plane and the figures are twisted and bent, provoking a sense of disorientation and “dizziness” within the viewer. The ‘original’ A4 images made on the photocopying machine has been scanned and printed in large format (100 x 150 cm) on “Fine Art” paper. It was essential for the artist to find images that were taken from the inside of the trenches, in which the dividing line between above and below ground can almost be felt physically, as if the viewer himself would be standing below ground, in the trenches.

In the same room the artwork Diminuendo (2015) is shown. It consist of four small wooden blocks (around 10 x 15 x 30 cm each), where curving or zig-zagging, deep lines of different depth have been carved out into the top surfaces. Lines which reminds about trenches dug by soldiers or river canyons in a landscape.

The installation Mirrored Tension (2015) consist of a strong oak-frame which is as wide as the room, while above and below there is a 35 cm gap between the edge of the frame and the floor and ceiling (the frame is 3,4 m wide and 2,6 m high).
In the frame there are two shovels stretched against each other by the use of pallet bands (strong over-dimensioned elastic bands). In the left half of the frame is an 70 – 80 year old shovel which has been used in agriculture. This spade is hanging horizontally with its blade directed towards another and smaller shovel: An old military-spade which presumably has been used to dig trenches during the First World War. Both shovels have quite sharp metal-blades, and they have been turned 90 degrees in respect to their natural vertical position. The two shovels are suspended horizontally in the air with their pointed blades facing each other, as two arrows ready to be shot one against the other. In this way, friction is created between a war devise and an agricultural tool, simultaneously implying a state of threat and attraction.
In the same room there’s also an artwork entitled An Invisible Force, consisting of four digital prints. This work combines two refined illustrations of strange roots with two photographs taken during the First World War, and in their formal similarity they express the intrinsic potential threat which is found in any disequilibrium.

The video Strategie ohne Strategie (2012) explores the tension between external and internal forces. A slowly rotating metal horse has been cut in two along its horizontal axis; its hollow form inside has been filled with bread dough. The leavening process alters and expands the form of the metal figure, and the object’s robustness is subjected to a pressing, pulsating interior. The work is a clear reference to the Trojan horse and strategic warfare.